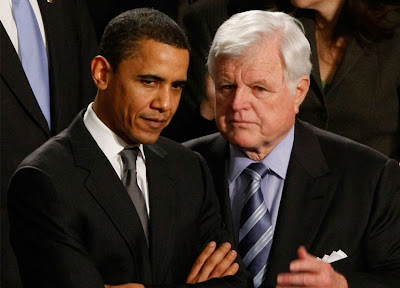 Now, I still know this is a tough vote, though. I know this is a tough vote. I've talked to many of you individually.
And I have to say that if you honestly believe in your heart of hearts, in your conscience, that this is not an improvement over the status quo; if despite all the information that's out there that says that without serious reform efforts like this one people's premiums are going to double over the next five or 10 years, that folks are going to keep on getting letters from their insurance companies saying that their premium just went up 40 or 50 percent; if you think that somehow it's okay that we have millions of hardworking Americans who can't get health care and that it's all right, it's acceptable, in the wealthiest nation on Earth that there are children with chronic illnesses that can't get the care that they need -- if you think that the system is working for ordinary Americans rather than the insurance companies, then you should vote no on this bill.
If you can honestly say that, then you shouldn't support it. You're here to represent your constituencies and if you think your constituencies honestly wouldn't be helped, you shouldn't vote for this.

But if you agree that the system is not working for ordinary families, if you've heard the same stories that I've heard everywhere, all across the country, then help us fix this system. Don't do it for me. Don't do it for Nancy Pelosi or Harry Reid. Do it for all those people out there who are struggling.

(parcial transcript of President Obama's remarks to the House Democratic Caucus on Saturday, as the chamber prepared for a vote on health care)